If this watch looks familiar, it should. It’s identical to the CA-901 [QW134] watch except the keypad is in shiny silver rather than in dark blue or black.

An advertisement from Popular Science (1982) suggested the CA-851 is all-stainless steel construction which would make sense, otherwise it might just as well have been another keypad/colour option for the CA-901.

Having owned a few of these, I’m not convinced it is stainless though, as I’ve seen the same pitting on the back of the watch as in the CA-901 and other metal-plated Casio watches of the time.

The silver keypad generally doesn’t hold up well either, with scratches being much more obvious on the silver finish than the blue/black anodised finish of the CA-901. 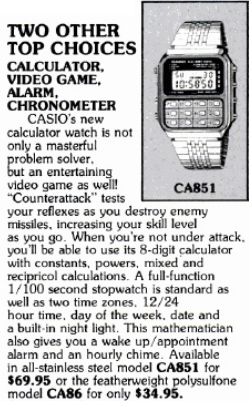 If you ever find one with an unblemished keypad, though, you’ll see it’s a nice-looking watch, and gives a more quality appearance than the polysulfone (plastic) models of the CA-85, CA-86 and CA-90.

According to Casio’s own documentation, the CA-851 was priced at a rather bargain USD49.95 on launch compared to the USD69.95 price of the CA-901. These pricing guides can be a bit sketchy, though, as the advertisement shows the CA-851 with a RRP of USD69.95.

Casio made a lot of these, and used versions can be found on eBay most of the time, along with NOS replacement crystals, keypads and buttons at times.

Price-wise, they’re about the same as the CA-901 these days and if you prefer it over other models with the QW-134 module, you can swap out the module with a different version if you find a broken one that’s in nice cosmetic condition.

If you have found a spelling error, please, notify us by selecting that text and pressing Ctrl+Enter.

The following text will be sent to our editors: