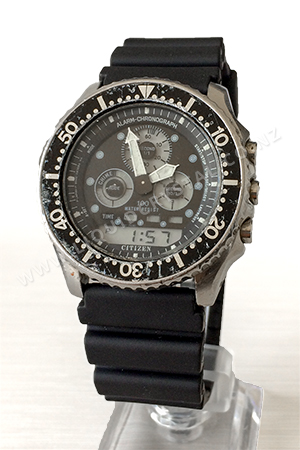 Citizen was great at combining analog and digital functionality into their watches — their wide range of ana-digi-temp watches is a great example, but they even extended this to some dive watches models, like this 8946 from some time in the 1980s.

With a moveable bezel, and large illuminated hands, it’s unmistakable as a dive watch and is water resistant to 100m, but it also includes date, an alarm, hourly chime, countdown timer and stopwatch.

They put so much into the display of the watch it’s bordering on unreadable (I’d estimate the font size is only about 4pt) but shares a bit in common with Casio’s TGW Tri-graph which had a similar number of dials. Casio went a bit nuts after that, releasing quad-graph, penta-graph and hexa-graph models with increasing numbers of dials.

Like the Casios, there’s some animation of the dials when the alarm sounds and overall it’s a smaller watch than many divers so doesn’t feel overly large or clunky on the wrist for everyday wear.

When this one arrived it wasn’t working. It was part of a watchmakers estate and I’m always a bit suspect about buying watches when they’ve previously been owned by watchmakers because they’re often customer watches that the watchmaker wasn’t able to repair and were just kept for parts.

There was no corroded battery inside it when I opened it up, and no obvious signs of leaking battery damage, but a new battery did nothing.

Since in 90% of cases, LCD watches just need power in order to show something on the display, I usually aim for somewhere close to the battery if the display is blank (and particularly if the light isn’t working either). In this case the contact for the negative side of the battery wasn’t making contact with any of the traces that came off it, so repainted in the broken traces and the digital part was again working.

There was a minor hold-up at this point because while I was getting a display on the LCD panels, it was all scrambled. I realised I had put the (symmetrical) LCD back in upside down, so correcting this we were now in business with digital.

The analog was also working now, but not working very well. It would lose between 30 minutes and two hours overnight, so was realistically unusable as a time piece.

Before tackling the challenging task of dismantling a very small analog movement, I figured I should try a piece of equipment I’d bought several months ago but never had to use thus far. 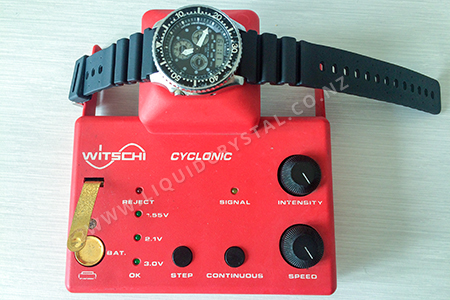 The Witschi Cyclonic does one thing and does it very well. It spins the dials of quartz analog watches and if the movement is stuck due to dried oil or specks of dirt, it can dislodge them and make the watch run properly again. (Actually it’s also a battery tester, but a multimeter does a better job of this).

I’d been looking for one of these for a while, but they’re not very common (especially in New Zealand) and were discontinued by the manufacturer years ago.

So when this showed up on a local auction site I pounced on it and when it arrived, left it in its box until now.

Sure enough, it did exactly what it was meant to — setting the intensity to get it moving, then the speed to get it smoothly turning, and it corrected the dragging movement.

Great result, and a new strap later this is a great-looking watch that’s going to get a lot of wear!

If you have found a spelling error, please, notify us by selecting that text and pressing Ctrl+Enter.

13 Responses to Citizen 8946 – the analog/digital diver

The following text will be sent to our editors: